Great digital tool for turning your handwriting into digital notes.

With the world’s obsession with apps and smartphones, it’s easy to forget how a simple handwritten note is sometimes the easiest way to jot down your thoughts. Luckily, you can still get the benefits of a searchable, syncable database with handwritten notes and get the best of both worlds.

If you need to make a note of someone’s phone number, it makes perfect sense to type it directly into your phone rather than using paper as a middleman. However, if you’re talking on the phone or don’t have your phone around, you may grab the nearest pen-like implement and scrawl the information down on any available flat surface, the back of your hand, or whatever else is within reach. Heck, some of you even prefer pen and paper for managing their to-do list.

There are many advantages to writing longhand. Over the years, there have been numerous studies that suggest that it is easier to remember information if it is written out in longhand rather than typed. Students the world over are all too familiar with this conceptwho hasn’t spent hours writing and re-writing lecture notes when cramming for an exam? 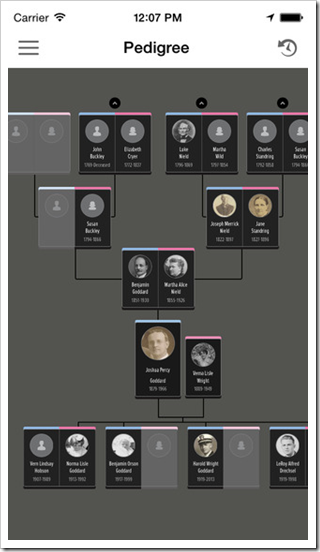 FamilySearch – Tree is a mobile tree viewer for FamilySearch Family Tree. It is available for both Apple iOS 7+ and Android 2.3+ devices. You can view the tree no matter where you’re at. You can download several generations of your pedigree for offline viewing. (I want to say six generations, but I don’t remember for certain.) You can add photos, stories, and audio recordings. The app does not allow changing information in the tree, but FamilySearch says that ability is in the works.

Have you ever stared at your RootsMagic screen wondering where to look next (or maybe even where to start)? There are so many record types and websites to search that you aren’t even sure where to begin. Or maybe you are a seasoned genealogist who just wants to make sure you don’t overlook anything. Did you know there is a program called GenSmarts which can help you choose which records to search for any person in your file?

Digital storytelling is one of those huge developments in our generation that seemingly arrived on the scene without great fanfare. One day it was just there. The transformation from radio to television was a big evolution but once we became a nation of watchers, everything else seemed to arrive on the scene without as much surprise – computers have evolved from desktop giants to mini-notebooks to the  tablet computer – televisions gave birth to VCR’s, DVD players, big screen TV’s, plasma, high definition and now 3D.

A story can be a combination of facts, morals, new ideas and knowledge. Since the listener is completely reliant on the story teller for his interpretation of the story, it is very important for the story to be told in a very interesting and evocative manner, in order to render it easily understandable. Thus, the art of storytelling can serve multiple functions for an educator.

When a story is being told, several things should be kept in mind. Begin the story by an engaging introduction, for instance, by relating where the story is based, with not only the present details of the place but its history should also be added to give a comprehensive overview. This can be followed by introducing the characters of the story. Ensure that you narrate the story with a lot of bright and vivid expressions to keep your listener engaged.

One day we turned on our computers and YouTube was a sensation. In a sense, YouTube is digital storytelling – the use of mixed media to weave together images, narrative, and music to bring to life the stories in our lives. For better or for worse, the digital tidbits put up on YouTube will live in infamy. But it does speak to the hunger of human beings to have their stories told.

A digital story is usually a video clip that is less than 5 minutes long, most often spoken in the first person narrative, using your own voice. There will be still images put together to illustrate the story you are telling, and often a music track will be added in the background to tug on the heartstrings of your audience. Your audience, for the purposes of genealogy, may not even be alive yet. Our parent company, LS3 Studios can turn your research into lasting memories documentary.

Technology has allowed us to use storytelling to leave our voice, smile, laugh, speech patterns, live color images of our hairstyle and clothing, to future generations. Where today we are limited to preserving pieces of paper to prove our ancestors lived, tomorrow’s generations of researchers will be able to watch their ancestors on the big screen using the latest and greatest digital storytelling device.